Underwater Marathon: An event for the World Oceans day

Underwater Marathon: An event for the World Oceans day

by Théo Cartereau
in blog
Comments

This year, the marathon took place around the Frioul archipelago in Marseille. In the 18th century, the island of Ratonneau, one of the four islands in the archipelago, served as a quarantine site during the plague.

On June 8, this emblematic place served as a playground and natural setting for an ode to nature – a call for the preservation of the ocean, a place of true freedom and a lung of the planet, during the World Oceans day.

The World Oceans day is an important date for the Notilo Plus team. When the Pure Océan Fund asked us to participate in and film the event, we agreed, of course!

Launched on the occasion of the Earth Summit, held in Rio de Janeiro in Brazil, in 1992, and formalized in 2008 by the United Nations, World Ocean Day celebrates the ocean and its essential role in our daily life. This day makes it possible to mobilize the whole world around the preservation of the ocean: the impacts of our human activities, the sustainable management of resources, endangered species, etc. This year, the theme in the spotlight was innovation for a sustainable ocean. It is therefore quite natural that Pure Ocean, approached Notilo Plus to help them put a spotlight on our Big Blue and its fragility.

A marathon filmed live by Notilo Plus

This special edition of the Underwater Marathon had the Notilo Plus team participate in the underwater relay marathon, but also in something else: our team was at the surface to ensure the live broadcast of the interviews at the surface as well as the evolution of the dives in the depth… At the same time!

Discover the three lives of this special day by clicking on the images below: 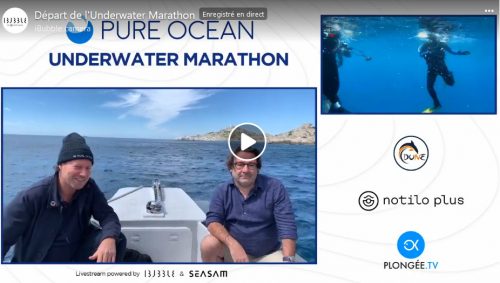 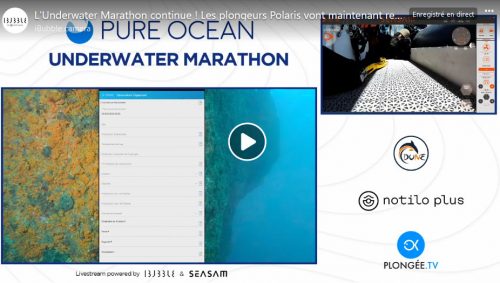 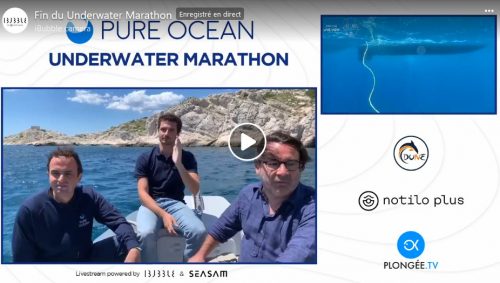 A post-lockdown event – by the rules!

This special edition of the Pure Ocean Underwater Marathon, designed in compliance with health rules and without a physical public audience, was a unique challenge. Several groups of teams took turns over a distance of about 10 km underwater.

With the return to a “new normal” that was announced with post-lockdown measures, the race against the clock to save the beauty of the Frioul archipelago and their biodiversity had begun. This is why we have taken the lead and shown that protecting our oceans is always our priority!

This event was also an opportunity for Notilo Plus to make full use of the capabilities of our drones – and this broadcast of underwater images live on the Internet is the first of a long series!

And you, what underwater event would you like to be able to follow live via the internet?

Tell us your ideas in the comments!

Subscribe to our newsletter and
get the latest news about iBubble!

Thank you, your subscription have been confirmed !

You will now receive the iBubble News.